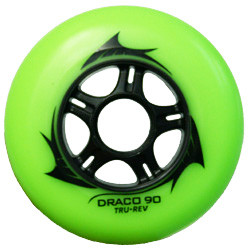 One of TruRev’s newest wheel editions, it was named after the dragon constellation of Draco. This wheel has been tested by skating superstars and said to be just as fierce as the dragon god its named after! Take a bite out of your competition with Draco!

* TruRev spends considerable time on Research and Development to achieve optimum inline skate wheels. We have an advisory board consisting of indoor and outdoor national and world champions, coaches and speed skaters for testing and advice.

This product hasn't received any reviews yet. Be the first to review this product!